I became Int FCI judge in Sweden in 1992 and is approved to judge all Group 10 (Sighthounds) and all Podengos Portugese, Ibizan Hounds, Canarian Warren Hound, Pharao Hounds and Cirneco dell’Etna in Group 5. I am now transfered as an Italian judge (ENCI/FCI).

I have  been judging at International level,  all around Scandinavia and the rest of Europe . Also several times in  GB, USA, once in  Australia (The 3 rd Whippet National), also in Israel and in Russia including several Breed Club  Specialties .
​Honored to do Whippet bitches at CRUFTS 2015 and Italian Greyhounds at the WORLD DOG SHOW in Milano 2015.

Looking forward to some very nice appointments for 2017 and among them is WINDSOR Championship show in June! 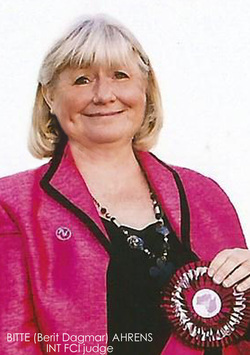